The Poodle, though often equated to the beauty with no brains, is exceptionally smart, active and excels in obedience training. He is also the only breed that comes in three size varieties. This size choice may be why the Poodle is one of the most popular breeds according to AKC® Registration Statistics. Poodles can be a variety of solid colors, including white, black, apricot and gray, but never parti-colored.

The breed originated in Germany as a water retriever. The stylish "Poodle clip" was designed by hunters to help the dogs move through the water more efficiently. The patches of hair left on the body are meant to protect vital organs and joints which are susceptible to cold. The Standard variety is the oldest of the three varieties. The Miniature variety may have been used for truffle hunting. The Toy Poodle was often used in performances and circuses.

Right Breed for You?

The Poodle can accommodate nearly any size living quarters. His hypoallergenic coat may reduce allergic reactions, but requires regular professional grooming. The Poodle is an active breed and requires daily exercise.

Toy Group
The Standard for the Poodle (Toy variety) is the same as for the Standard and Miniature varieties except as regards heights.

General Appearance, Carriage and Condition That of a very active, intelligent and elegant-appearing dog, squarely built, well proportioned, moving soundly and carrying himself proudly. Properly clipped in the traditional fashion and carefully groomed, the Poodle has about him an air of distinction and dignity peculiar to himself.

Size, Proportion, Substance Size The Standard Poodle is over 15 inches at the highest point of the shoulders. Any Poodle which is 15 inches or less in height shall be disqualified from competition as a Standard Poodle.

As long as the Toy Poodle is definitely a Toy Poodle, and the Miniature Poodle a Miniature Poodle, both in balance and proportion for the Variety, diminutiveness shall be the deciding factor when all other points are equal.

Proportion – To insure the desirable squarely built appearance, the length of body measured from the breastbone to the point of the rump approximates the height from the highest point of the shoulders to the ground.

Substance – Bone and muscle of both forelegs and hindlegs are in proportion to size of dog. 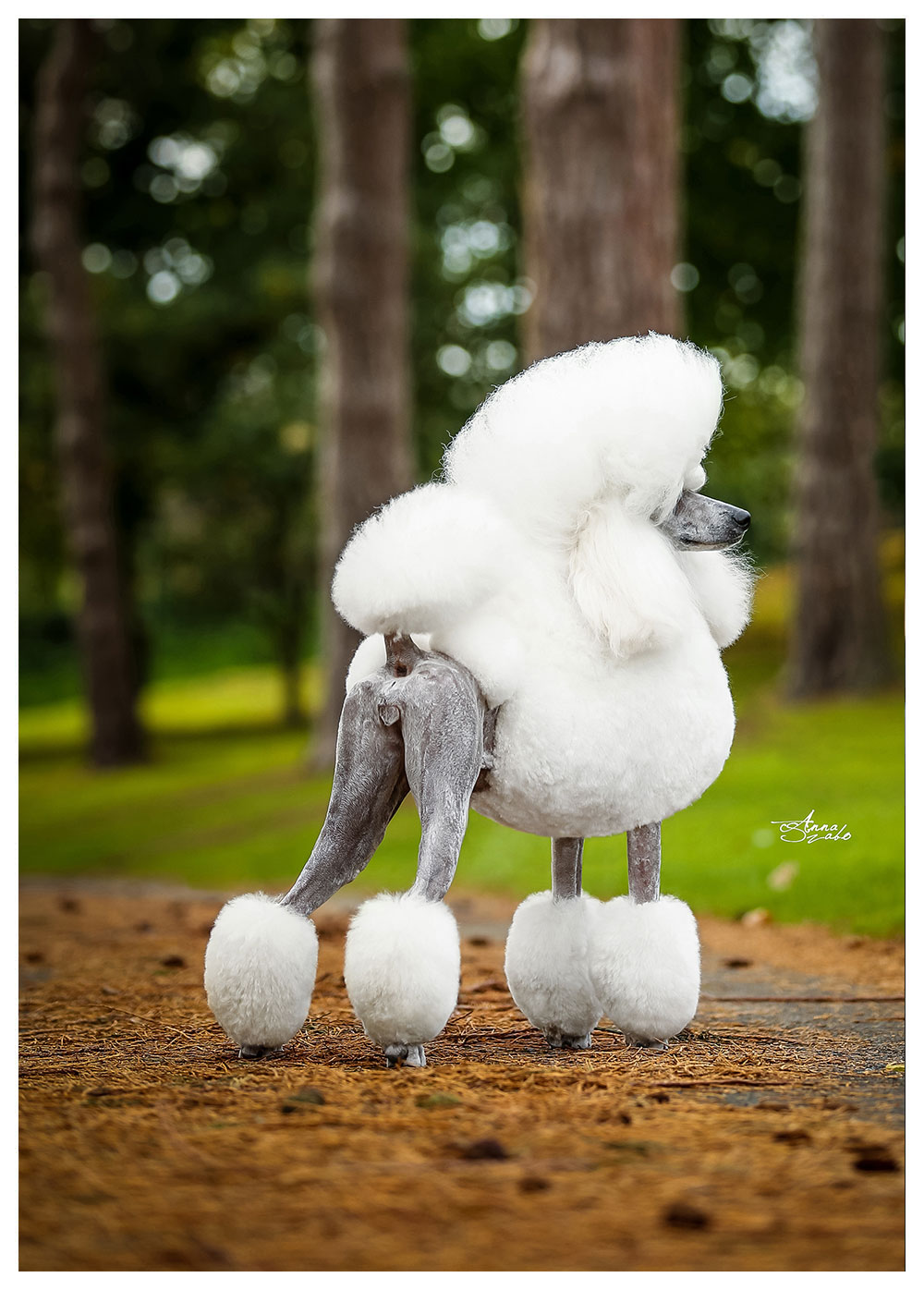 Head and Expression
(a) Eyes– very dark, oval in shape and set far enough apart and positioned to create an alert intelligent expression. Major fault: eyes round, protruding, large or very light.
(b) Ears– hanging close to the head, set at or slightly below eye level. The ear leather is long, wide and thickly feathered; however, the ear fringe should not be of excessive length.
(c) Skull– moderately rounded, with a slight but definite stop. Cheekbones and muscles flat. Length from occiput to stop about the same as length of muzzle.
(d) Muzzle– long, straight and fine, with slight chiseling under the eyes. Strong without lippiness. The chin definite enough to preclude snipiness. Major fault: lack of chin. Teeth– white, strong and with a scissors bite. Major fault: undershot, overshot, wry mouth.

The topline is level, neither sloping nor roached, from the highest point of the shoulder blade to the base of the tail, with the exception of a slight hollow just behind the shoulder.

Body (a) Chest deep and moderately wide with well sprung ribs. (b) The loin is short, broad and muscular. (c) Tail straight, set on high and carried up, docked of sufficient length to insure a balanced outline. Major fault: set low, curled, or carried over the back.

Forequarters Strong, smoothly muscled shoulders. The shoulder blade is well laid back and approximately the same length as the upper foreleg. Major fault: steep shoulder.
(a) Forelegs – Straight and parallel when viewed from the front. When viewed from the side the elbow is directly below the highest point of the shoulder. The pasterns are strong. Dewclaws may be removed.

Feet – The feet are rather small, oval in shape with toes well arched and cushioned on thick firm pads. Nails short but not excessively shortened. The feet turn neither in nor out. Major fault: paper or splay foot.

Hindquarters The angulation of the hindquarters balances that of the forequarters.
(a) Hind legs straight and parallel when viewed from the rear. Muscular with width in the region of the stifles which are well bent; femur and tibia are about equal in length; hock to heel short and perpendicular to the ground. When standing, the rear toes are only slightly behind the point of the rump. Major fault: cow-hocks.

Color The coat is an even and solid color at the skin. In blues, grays, silvers, browns, cafe-au-laits, apricots and creams the coat may show varying shades of the same color. This is frequently present in the somewhat darker feathering of the ears and in the tipping of the ruff. While clear colors are definitely preferred, such natural variation in the shading of the coat is not to be considered a fault. Brown and cafe-au-lait Poodles have liver-colored noses, eye-rims and lips, dark toenails and dark amber eyes. Black, blue, gray, silver, cream and white Poodles have black noses, eye-rims and lips, black or self colored toenails and very dark eyes. In the apricots while the foregoing coloring is preferred, liver-colored noses, eye-rims and lips, and amber eyes are permitted but are not desirable. Major fault: color of nose, lips and eye-rims incomplete, or of wrong color for color of dog.
Parti-colored dogs shall be disqualified. The coat of a parti-colored dog is not an even solid color at the skin but is of two or more colors.

Gait A straightforward trot with light springy action and strong hindquarters drive. Head and tail carried up. Sound effortless movement is essential.
Temperament Carrying himself proudly, very active, intelligent, the Poodle has about him an air of distinction and dignity peculiar to himself. Major fault: shyness or sharpness.

Major Faults Any distinct deviation from the desired characteristics described in the Breed Standard.